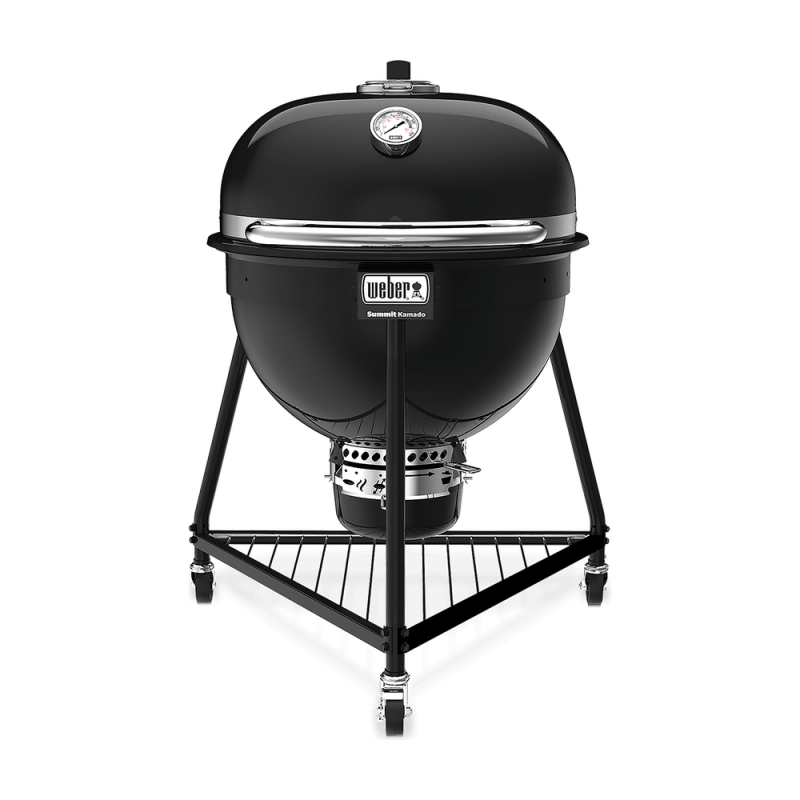 Your backyard won’t know what hit it. The innovative design and unlimited potential of the Weber Summit® Kamado E6 Grill lands it in a class of its own. Sear the perfect steak, grill a whole chicken, or transform your grill into a smoker, creating mouthwatering ribs.

Summit by name and summit by nature, Weber®'s top-of-the-range charcoal barbecue does it all and is exclusive to Weber® World Stores.

Whether it be grilling, roasting or baking at extremely high temperatures, or smoking over a long period of time at a very low temperature this barbecue has been designed to allow you to do the lot!

With a thick aluminium lid liner acting as a seal and a double-wall construction around the body of the kettle, the Weber Summit Kamado E6 Barbecue traps warm air which then acts as an insulator allowing greater control over the cooking temperature as well as needing less fuel to cook with.

In addition, by using aluminium to line the lid and with the aid of a sturdy spring-assisted hinge the lid remains light and easy to open and close.

Unlike the rest of the Weber® charcoal barbecue lids, rather than the traditional vent the Weber Summit Kamado E6 has a unique multi-position Rapidfire lid damper which, when fully open, provides a chimney starter effect making it possible to start the barbecue quickly. Also, having a hinge means the damper can be fully opened to boost the flow of air to rapidly raise the internal temperature of the BBQ.

Another feature on the Weber Summit Kamado E6 is the 'Smoke' setting incorporated into the One-Touch® cleaning system. By simply rotating the control lever to the 'Smoke' icon the bottom vents are then significantly reduced to allow minimal airflow through the unit, thus reducing the temperature and holding it in the 'smoke zone' (as indicated in the specially designed lid thermometer). Together with the supplied diffuser plate this function transforms the barbecue into a smoker with optimal airflow.

Even the versatile diffuser plate plays many roles depending on the type of cooking being done. Comprising of two layers of hinged stainless steel the plate can be used to enclose an air gap to aid low and slow smoking as well as stand up to higher temperatures during grilling.

As you would expect from a barbecue offering so much, the Weber Summit Kamado E6 comes with a 61cm hinged Gourmet BBQ System® grate with a removable 30cm centrepiece to allow you to combine all of the GBS® accessories including sear grate, wok, pizza stone and griddle (all sold separately) to further enhance your cooking possibilities.

Besides the versatility that the 61cm Gourmet BBQ System® grate offers, it also has an impressive 2922cm² total cooking area which is more than sufficient for a family or group of friends to enjoy a hassle-free garden party or all-year round alfresco get-together.

As you would expect from a quality brand like Weber® there are a huge range of accessories designed to assist and take your outdoor cooking to the next level from cook books, tools, warming racks, covers right through to flavoured wood chips.

chat Comments (0)
No customer reviews for the moment.

Are you sure that you want to report this comment?

Your report has been submitted and will be considered by a moderator.

error Your report cannot be sent

Your comment has been submitted and will be available once approved by a moderator.

error Your review cannot be sent